We just got added to this bill!

flyer by the fabulous Dee Claw

Building up a nice little archive of live clips on YouTube, check it out!

Check out the review of our show last weekend by Tim’s Triangle Tribune. Thanks Tim!

I only made it to one of the two shows I wanted to see last night. I got out of work just after 7 (on about 5 hours sleep) and met up with Nathan Curtis around 9. We headed over to the rock dungeon at Max Krauss’ house just as Great Western started to play. Their song structures had a bit of country, but the songs rocked! Ripping solos, lush keys, interesting rhythms, they were really good.

Next up Dr Green played a rocking set. They were a bit more straight-forward than Western, but played solid joyful rock and roll. Max joined them on guitar for a couple of songs.

Next up Spirit Animal were less indie than I expected, and a bit more metal. They had a bit of a Stellastar bounce to the songs, but the twin guitars kept things heavy and rocking. 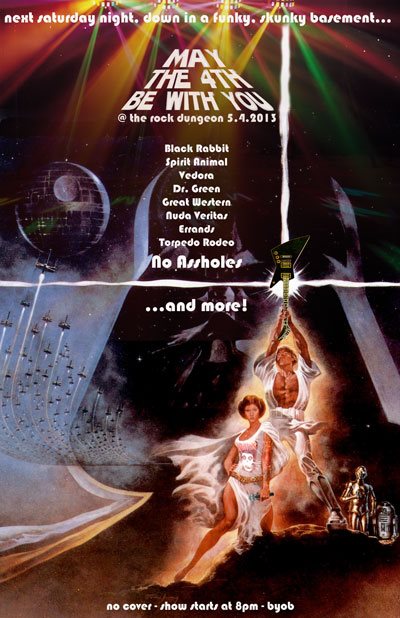 Another review from Tim’s Triangle Tribune by Tim Lewis, of our recent show at The Monkey House:

“I got in and settled, and soon after Black Rabbit hit the stage. They played a killer set of short, fast, loud rock songs. Having seen them a few times, I have a sense of where the songs are going, but they still kept me guessing a bit. Halfway through the set, there was a song I recognized. It was a fantastic cover of Chinese Rock by The Ramones. They came back with a bunch more of their songs, then wrapped it up with a Damned cover. It was a great set and they had me dancing the whole time.”